A few titles were delayed last year at various stages for various reasons. I now announce them both. First is  Sphinx, by David Lindsay, for which I wrote a new Introduction.

In Sphinx (1923), Nicholas Cabot has come to a country-house called Mereway where he plans to work on a machine he has invented that records dreams. He encounters a family with three marriageable daughters, and takes refuges from them in the company of some neighbors, including the calculating Celia Hantish and the well-known composer Lore Jensen, who has written a tune called “Sphinx" which hints at the riddle of existence. Meanwhile as Cabot experiments with his machine, he finds that dreams give access to a deeper meaning of life.

Trade paperback edition ($20.00) sold via Amazon (and other  affiliates) ISBN 9781987594317.
Amazon.com at this link. Amazon.co.uk at this link.
Trade paperback edition ($20.00) sold via Lulu, at this link.
Kindle edition, sold via Amazon and affiliates.
Next is The Cult Murders, by Leonard Cline, writing as Alan Forsyth.  This is the first of Cline's three pseudonymous pulp thrillers, written while he was in jail for manslaughter.  To be fair, Cline didn't think much of his pulp writing, and it is negligible in comparison with Cline's serious literary work under his own name.  But that doesn't mean that his pulp-writing is without interest or merit. The Cult Murders concerns a Devil worshiping cult set up to fleece rich women of their fortunes. Originally serialized in 1928, this is the first appearance in book form.

The Cult Murders, by Leonard Cline, writing as Alan Forsyth 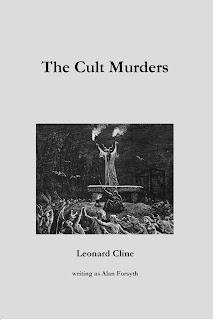 Posted by Douglas A. Anderson at 1:00 AM